All Stars started as a spark of an idea. I’m not sure where it even came from, but one day I found myself editing one of my family photos in an effort to animate them and to get them to move. Although I didn’t know it at the time, I was developing parallax animation and using the iPhone’s gyroscope to make a still image move.

The next jump from there was to decide what to do with the emerging technique. That really was a no-brainer. I was looking for some way of creating a digital collectible in app form and it seemed to me that the parallax animations would be a great choice and would bring still images to life.

Initially, I called the idea Moveables, because it was based on a gentle rotation of the iPhone. I created several prototypes, the largest of which was based on Harry Potter and is discussed at length here.

In due course, my attention shifted on to sports teams, and in particular I wanted to aim at Premier League football teams. As a result, I did prototypes based on Liverpool and Tottenham. The idea was to bring together a team’s current and former players into a single app based on building a collection through in-app purchase. If you’ve ever collected football cards from Topps and Panini, essentially this was the digital equivalent.

I called the concept All Stars and I massively increased the level of collectibility and features in the app. In addition to the parallax animation I added simple gameplay based on tile puzzles and an extensive football simulation game where users could use the players in their collection to form their own All Star team and play it against fictional teams from around the world. 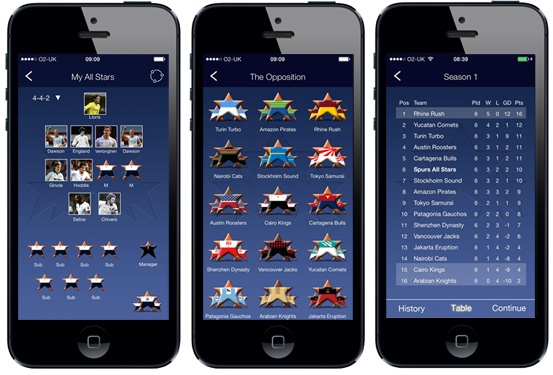 There were a number of barriers to success and at the top of the list was the ability to licence suitable images to process and include in the apps. Although there are photo agencies that could provide all of the images, any commercial app needed a licencing agreement with the individual football club. As expected this proved to be very difficult to negotiate. These deals all require a minimum guarantee and when you’re launching a completely new concept it’s difficult to make that commitment.

As a result I worked with two business partners to target a more approachable test opportunity in the form of the Welsh Rugby Union. The idea was to create an All Stars app for the Wales rugby team, learn from the experience and move on to football clubs having gathered some useful data.

The Wales All Stars app was launched in November 2014 at the start of Wales’ Autumn international series. It was a chastening experience.

Shortly before the app was approved by Apple they rejected the concept of users being able to trade “cards” via the local peer-to-peer connection that they had introduced into iOS, which meant that we lost a major feature. The marketing that I organised for the launch, via the WRU and on social media proved largely ineffective and despite some excellent user feedback, it quickly became apparent that we could not afford to continue to lose money on the product.

In hindsight the choice of the Wales rugby team as a test subject was also a big mistake. Although fans are passionate, the team plays very few games a year and interest revolves around just a few months of the year. By contrast, football fans are engaged with their team nearly all year round. It would have been better to skip the test and gone straight for the bigger prize, but that’s hindsight for you.