NerdNav is an augmented-fantasy mobile app that allows you to see your position relative to real and fictional places. The app was available on iPhone and iPad, but I removed it from the App Store in February 2018. I was planning to split the functionality into a number of smaller apps for release on iOS and Android, but I’ve been distracted by LifeStories.

The app was based on 4 datasets:

Camera mode allows you to see locations in your datasets in real time relative to your position and orientation. Camera mode has two sub-modes, surface and direct, switchable from a pair of buttons at the bottom right of the screen.

In surface mode, locations and distances are given as if the device is held vertically and the locations are on the horizon as shown below. 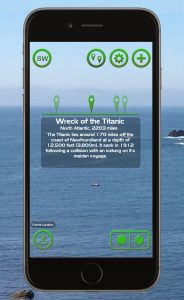 In direct mode you can tilt your mobile device downwards and see what is below your feet right now. Imagine you could tunnel down in a particular direction, NerdNav shows you what you’d find. 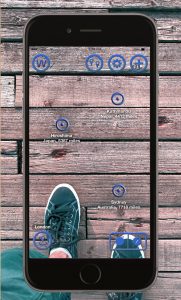 Map mode shows you the positions of the locations in your datasets relative to where you are now, but in a more conventional way on a global map (requires a data connection).

For locations in the Global and Nerdverse datasets, you simply browse around and tap one of the many locations as shown below. 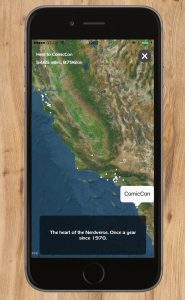 For locations in the Middle Earth and Game of Thrones datasets the situation is different. In these cases the fantasy worlds are mapped as if they are in the real world.

There is an option to select both the start and end locations as if you were making a journey between the two points. For example, the image below shows the journey that Frodo has to make to Mount Doom, as if Hobbiton was in South Wales. Your own version will be different as it will use your location as a starting point. 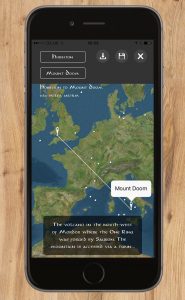 You can see the position of other major landmarks in Middle Earth by tapping on any of the white location markers. In addition, you can save a journey, so if you decide to emulate the journey of one of your favourite fantasy characters, you can track your position as you travel.